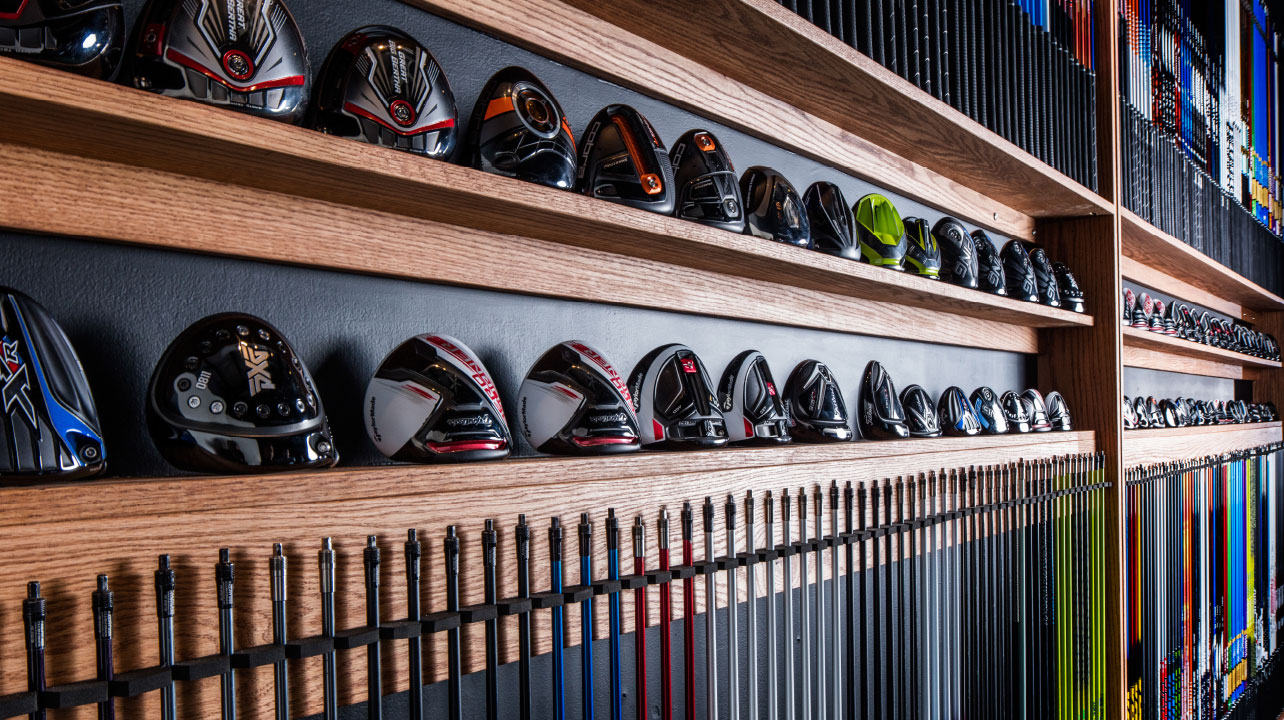 A number of friends have asked me about my recent fitting experience at Club Champion, so I wrote up a little review for them and thought I’d also share it here.

What they want to know most is if it’s worth the price and if I learned anything I didn’t already know. The short answer is yes, I thought it was worth it and I did learn some things along the way.

I think the highlight for me was the availability of all types of exotic shafts. Eric was my fitter and he obviously has more knowledge of the clubs/shafts than I do so that was extremely helpful.

Club Champion emails a questionnaire prior to the fitting to find out a few things. They ask if you are loyal to any brands so they can ensure you hit those brands during the fitting. They also gauge the kind of player you are based on index and your answers to several quick questions.

I did a full bag fitting simply because it was 50% off (new store discount) and I thought it would be a fun way to spend 3.5 hours in the heart of a winter snow storm. The full bag fitting includes irons, driver, wedges, fairway wood, hybrid and putter.

I started by warming up with a 7-iron, then moved on to the 6-iron that’s currently in my bag (gamer). These swings provided a baseline for the TrackMan data. I have the TaylorMade PSI’s in my bag, so Eric grabbed the TM 790’s first since they’re most like the PSI. They only have 6-iron heads at the store and will have you try several head/shaft combos. You’re only hitting 6-irons to allow for accurate comparisons of data between different manufacturers.

Eric analyzes every swing and pays attention to what the ball is doing relative to the baseline data from the club you’re gaming. He’s looking at ball speed, club head speed, smash factor and spin. Eric can tell quickly if a club isn’t working out, so you can eliminate it from the hunt. All the while you’re trying to find that perfect shaft/iron combination. I had a giant blister on my hand by the end of the fitting, but we eventually found the combination that best suited me. Eric added it to the quote and we moved on to the driver and repeated the process.

I tried several drivers but hit the Srixon head the best with the PADERSON KINETIXX LOADED. I am currently gaming the Srixon Z-785 so I was pleased that I had good results with that head and only needed to change the shaft. I had never heard of Paderson before stepping in to the store that day. The drivers I hit were from TaylorMade, PXG, Ping, Cobra, Srixon and Callaway.

Eric put tape on the bottom of my wedges and asked me to hit a few 60-75 yard shots. He looked at the bottom of the tape and saw the impressions were right in the center. According to Eric, this was desirable, so we didn’t spend much time on wedges other than discussing the Vokeys’ grinds. I looked in to the grinds when I got them at the end of last season and am happy with my current wedge setup. He didn’t disagree based on the swings I took so we moved on after seeing a few other wedge options

Eric asked if I wanted to move on to fairway woods or hybrids. Fatigue was setting in a little after all the swings, so I felt it best to spend the remaining energy on fairway woods. To me, it was more important than hybrids because of how many times I hit fairway wood at my home course (5-6 per round) compared to the number of times I hit hybrid (once or twice). Based on the driver shaft we decided on earlier, he had an idea of the type of fairway wood shaft I needed.

I hit the M6, Cobra and a few others, along with a few different shafts: Paderson, Project X, Oban, etc. After trying a number of these combinations, he handed me what he described as the “Secret Weapon” – it was the M6 Rocket fairway wood. He wasn’t kidding. After hitting the secret weapon, I increased my distance and was more consistent, so we decided on that club head. That club is apparently selling really well and is already on backorder. I suspect I’ll see several secret weapons on the course this summer.

We repeated the familiar process with the hybrid and narrowed it down to the Srixon Z-H85. I was gassed at this point in the fitting.

We moved to the SAM putting device on the putting green. Eric attached a device to my current putter and calibrated the machine based on how I address the ball. He then had me hit eight putts toward the hole. I missed the first one and literally made the next seven in a row. Felt like Tiger.

He basically said if it’s not broke, don’t fix it. The results showed the path with which the club head hits the ball at impact, the rotation of the club head relative to the path, the degree at which the face is open/closed at impact, the launch conditions, lie at impact, consistency of rotation and some other data. The results make recommendations based on the data. They suggested a balanced mallet putter with a jumbo grip to minimize movement/turning of the club face. I’m currently gaming a Scotty Cameron X5R so we didn’t feel a need to change.

Obviously, I only play K-Sigs. Just kidding, this is just a nod to the /r/golf/ subreddit community. We didn’t spend much time on ball fitting, we just talked about the subtle differences between Prov1 and Prov1x, TP5 and TP5x, etc.

All in all, I enjoyed the fitting and certainly don’t mind paying $175 (normally $350) for a proper fit every few years (the last time I was fit was in 2015 so I was overdue). Once the fitting was done, Eric provided me with a quote.

The price to get a whole new bag’s worth of equipment brought on sticker shock. Club Champion included Mill River pricing (15%) on the club heads but not on the shafts so that’s pretty nice they’re able to do that. I may end up purchasing some of the equipment from Club Champion – likely the driver shaft and maybe the fairway wood and shaft.

Since I was fit for the M5 irons, I’m going to purchase them from TaylorMade.com simply because I’m able to take advantage of the trade-in program they have. For a limited time, TaylorMade is letting you trade in clubs and receive 150% value with the purchase of any M5/M6 product (valid until 11:59 PM on March 3). This is hard to beat given that I’m trading in my old PSI iron set and six other older clubs (TaylorMade M2 driver, M2 3W, an old R5 Dual driver, and 3 Vokey SM5 wedges). The total trade-in value is $622.50. To me, it’s worth trading in these clubs rather than going through the hassle of trying to sell them on eBay or GolfWRX.

TL, DR – I found the fitting helpful and worth the money because I wanted to figure out what equipment worked best for my golf swing. I purchased the irons/shafts from TaylorMade.com because I could take advantage of their trade-in program. I purchased the driver shaft from Club Champion and I haven’t purchased the fairway or hybrid yet but will give it more thought before I get into the swing of things this season.

The highest point on the @sandvalleygolfresort property, the #Volcano is where everything comes together at America’s hottest #golfresort, including the 1st and 10th tees, ~ 9th, 18th and alternate 6th greens (for the 6-hole loop played at twilight), practice puttting green, range and #craigsporch.
Had the chance to get back to one of my favorite vacation spots last week, @sandvalleygolfresort
Excited to get the next couple days started out this afternoon at @bullseyegolfclub in #WisconsinRapids.
It’s @sandvalleygolf week! Looking forward to returning to one of my all-time favorite and one of the world’s hottest #golfdestinations on Thursday to re-shoot the #Sandbox and #SandValley courses.
One of the toughest holes on the course, the 10th at @erinhillsgolf features a mostly blind, uphill tee shot that typically plays dead in to the wind.
An overhead view of the par 3 14th at @northshoregc in #Menasha #Wisconsin
Happy 4th of July, everybody!
A little auto-generated #video from the @djiglobal app from last week’s epic morning #photoshoot at @erinhillsgolf - what a beautiful #sunrise and #golfcourse!
Rough weather today for Charlie’s 1st day of #JuniorGolf at @nhccwi but he’s already looking forward to next week!
The Village at @erinhillsgolf is modeled after the old-fashioned towns of #Scotland and #Ireland - aesthetically, it works harmoniously with the inland links-style course and its vast expanses of rolling hills and #fescue fields.
The 18th at @erinhillsgolf is one of the most iconic #golf holes in the entire state of #Wisconsin.
While none of us used the @bubbawatson speed slot added prior to the 2017 @usopengolf at @erinhillsgolf , our threesome was a combined -2 on the beautiful par 4 2nd hole yesterday.
As an unintended consequence of playing and #photographing #golf on the 2nd longest day of the year, today it meant getting up to chase light early. Real early.
I’m starting to allow myself to get excited for June 22 and my first trip back to @erinhillsgolf in 3 or 4 years.
I’ve been working on a #golf #coursereview of @tuckawaycc in #Franklin #Wisconsin, one of the top #privategolf courses in the #Milwaukee area and former host of the #GreaterMilwaukeeOpen for 20+ years.
Got a chance to try out a new #golfglove today from @redroostergolf - a really nice, premium product that feels a lot like the @footjoy #StaSof I normally use and love, but with maybe a little nicer aesthetic.
One of the #Milwaukee / #Waukesha area clubs I’m hoping to check out this season is the #LegendatBrandybrook in #Wales #Wisconsin.
You don’t have to look far to find beauty at @kiawahresort - with 5 public courses including the #OceanCourse that’ll be played this week for the @pgachampionship and the @gary.player designed #CougarPoint course pictured here, you’re always just blocks from the ocean on #KiawahIsland, and beautiful golf and scenery abounds everywhere.
The 17th on the #OceanCourse at @kiawahresort should figure in prominently on #ChampionshipSunday at this week’s @pgachampionship, always inviting big numbers with a pin placement near the pond.
Hey Glen @midwestgolfing - I think these might need to be our new uniforms for #TeamWisconsin at this year’s #WritersCup at @mistwoodgolf!
Loading Comments...
%d bloggers like this: