It’s here – today is day one of the PGA Championship week at Whistling Straits!

The 18th at Whistling Straits during the 2010 PGA Championship

The weather in Kohler, Wisconsin has been waffling between overcast and rainy, and sunny and perfect, but practice rounds are being played today and tomorrow until 7:30 pm CST.

I will be making the trip up to the Straits tomorrow after work to walk the course and spectate for an hour and a half or so, and am looking forward to it.

As many of you probably know, practice rounds are the only time that cameras are allowed on the course. So even though I will be inside the ropes on Friday and Sunday, photography will be strictly prohibited.

The Straits is as close to my home town of Menomonee Falls as any PGA Tour stop will come, until the 2017 US Open at Erin Hills. Whistling Straits, and the tiny town of Haven which it inhabits, is just over an hour door-to-door, but with traffic may take a bit longer.

Other than maybe watching practice rounds tomorrow, I will also be volunteering for the event as a course marshall on the 14th hole on Friday, and then will be a hole captain for the same hole on Sunday.

I am not 100% sure what that will all entail, but am looking forward to finding out and doing my best to make sure all goes smoothly in Volunteerland on the par four “Widow’s Watch.”

Last night, I got my volunteer’s package that showed me what my $200-plus payment to participate in the event actually went toward: Awesome golf gear! 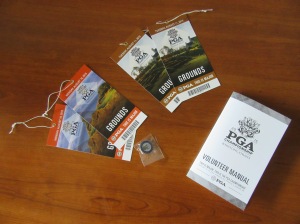 Will defending champ Rory McIlroy find a way to defend his PGA ‘ship on a bum ankle? Will this be the event that Tiger gets his A-game back? Will Jordan Spieth win his third major of the season? Can Dustin Johnson get over his crushing defeat here in 2010, not to mention in this year’s US Open? Will Martin Kaymer find a way to defend his last PGA Championship victory on this same course five years ago?

The early odds are about where you’d expect them to be:

Tiger being 25/1 is pretty surprising to me, but we’ll see if he’s still got a little major magic in him this weekend.

There are so many great story lines to this year’s PGA Championship, and I for one cannot wait to see how it all unfolds at not just one of Wisconsin’s best, but one of the entire country’s best and most storied golf courses: The Straits at Whistling Straits.